Yellowknife – a stroll around town

As May draws to an end, it becomes increasingly tempting to skip weekend chores and get outside. Yellowknife is an easy town for walking, and many people walk to work every day, even in the depths of winter. For the leisurely weekend walker, a stroll around town reveals points of interest and snippets of history, all hiding in plain sight.

Starting in Old Town, the original settlement of Yellowknife, a trek up the numerous stairs that wind around the rock up to the Pilot’s Monument is a must. This monument is dedicated to the bush pilots of the 1920s and 1930s, who made the north more accessible to southerners, and also helped to map the terrain. There is still demand in the north today for small airplanes, be it for scheduled travel to smaller communities, or a charter into the bush for work or a long hunting trip. The reward for hiking up the stairs is a wonderful view, of Old Town, ‘New Town’, the Great Slave Lake, and the endless blue sky. Gaily-painted house boats dot Yellowknife Bay year-round: frozen in place in the winter, silently mobile in the summer.

The smaller lakes have thawed out by now, but there is still ice on the Great Slave Lake, although it’s weakening daily. A rather intrepid musher and his dog-team fell through into the icy waters earlier this month and needed to be rescued. I could happily live my entire life without that kind of adventure. In the area between the mainland and Jolliffe Island are the last vestiges of the ice landing strip for small planes. During the summer, float planes skim the water in this area.

Down the hill from the monument, a little old wooden building known as the “House of Horrors” now leans into its dilapidation. As the story goes, this house was the location of card parties during the 1940s. Somehow, “card parties” strike me as being too tame for it to garner that name, and for this Wild West town. My imagination gravitates toward illicit activities, squabbles over the few available women in town, perhaps a murder or two, or a body found floating in the lake under mysterious circumstances. There used to be a plaque on the building to mark its history, but within the past year it has met with an uncertain fate, as may have befallen some who attended those “card parties”.

Heading down into the flatter section of Old Town, staying on the mainland, you pass by the Old Town Glassworks, where empty bottles are turned into glasses, bowls, vases, jewellery and other objects, with sand-blasted artsy designs. It beats filling the landfill with pulverized glass. You can even attend a workshop and design your own piece. 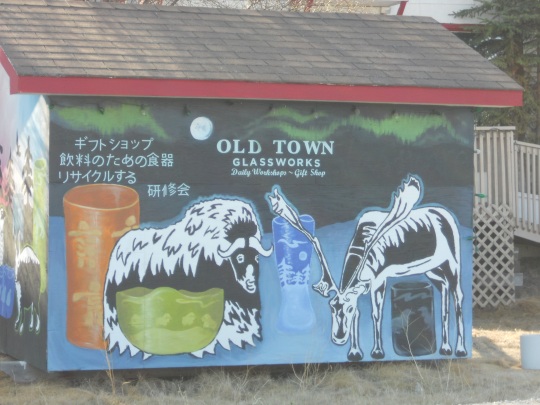 Around the corner is the site of the old Hudson’s Bay Warehouse, built in 1938. The original building was razed by fire in 1944 and replaced with the current one. It’s a nondescript, brown building that you’d pass by without a glance, because there’s nothing setting it apart except for a plaque on one wall. This warehouse supplied the town’s mining community for years, and operations were later moved to a site in New Town. The warehouse is no longer in operation, but it’s now a City of Yellowknife Heritage Site. 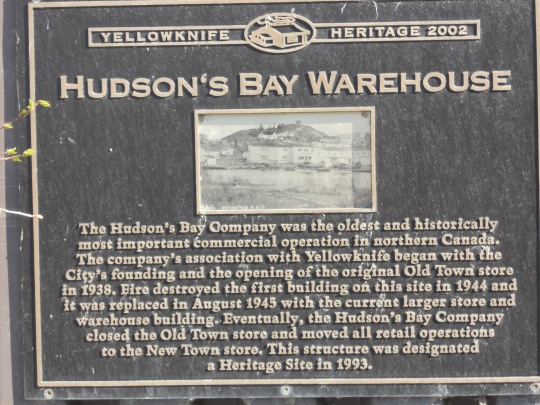 Just up the road from there is the Wildcat Cafe, another reminder of this town’s long mining history. I am yet to see the inside of this old log cabin, because it has been closed and under restoration since before I moved to Yellowknife. Its opening date has been postponed more than once, due to delays with various materials, appliances, or contractors. The sign outside still indicates that it will reopen in May 2012. You don’t have to live in Yellowknife for long to learn that deadlines can be very flexible. If the resourceful wildcatters of yore were still around, I suspect that they might have renovated and opened it on time, because they were probably always hungry.

No mention of those early miners can be made without bringing up Ragged Ass Road, the street in Old Town named after its residents who did not have much luck in prospecting for gold. For some reason, the sign for the street was repeatedly stolen. So now the street sign is on the houses, and you can also pick one up as a souvenir.

Leaving Old Town, a walk up the hill to “New Town” along Franklin Avenue (the main street) brings you to 50th Street. One block of this street is considered the seedier part of town.  I prefer to call it the most colourful block in town. This is where the infamous Gold Range Hotel stands. Aside from the lodging on the upper floors, which I suspect hasn’t earned any Michelin stars, there’s a lounge and a bistro on the ground level.

I’m told that you’re not a real Yellowknifer unless you’ve gone dancing at the Gold Range lounge, fondly referred to as the Strange Range. Despite the colourful neighbourhood, it’s a well-patronized establishment. I’ve earned my citizenship, because I’ve had brunch at the bistro, where the serving was hearty enough to feed a hard-working miner, and I’ve been to the lounge. Let me rephrase that: I’ve passed through the lounge. It was a Friday night and I was out with some friends after an event. As we approached, I sensed that a fight was brewing just outside the door. The only reason I went by anyway was because there were more guys than girls in my party, and I figured the fight would be over by the time we were leaving.

Once inside, it reminded me of an old western movie, in that it felt like a place where you don’t want to sit with your back to the door. It wasn’t a packed crowd, so I was able to walk around and take in both the occupants and the structure. It’s a small town, so some of the occupants took me in as well. Anywhere you go, the regulars always know the new blood. The floor and the walls were very worn, and I’m willing to bet that they have seen some interesting goings-on over the decades. Welder’s Daughter, the regular (and fantastic) band wasn’t playing that night, and their replacement was playing country music, which meant that I wouldn’t be sticking around for long. Country music is inescapable in the north, as it’s extremely popular, much to my dismay. It intrigues me that such melancholic music would have great appeal in a place where the winters are dark and depressing enough. As far as I’m concerned, if the brutal winters don’t become the death of me, country music will finish off whatever is left.

Heading up toward Frame Lake, you can swing by the Ceremonial Circle, which is dedicated to the communities of the Northwest Territories. It’s open for use by the public, and just off the circle, the walkway to the Prince of Wales Northern Heritage Centre is flanked by the flags of all 33 communities of the NWT. 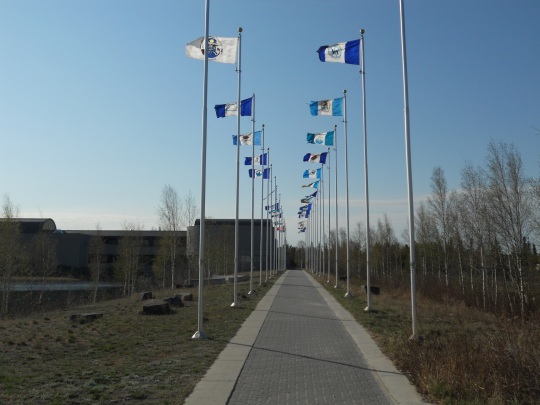 Flags of the 33 NWT communities

Somba K’e Park is a stone’s throw away, bordering Frame Lake. Somba K’e is the Dogrib name for Yellowknife and it means “the money place”. This park is adjacent to City Hall, and it’s a favourite gathering place for community events. Earlier this month, there was a lunchtime session of drumming and dancing in the park, the traditional way to celebrate the spring. In front of City Hall is a totem pole, donated by a First Nation in British Columbia, to mark 100 years of that province being a part of Canada, in 1971. 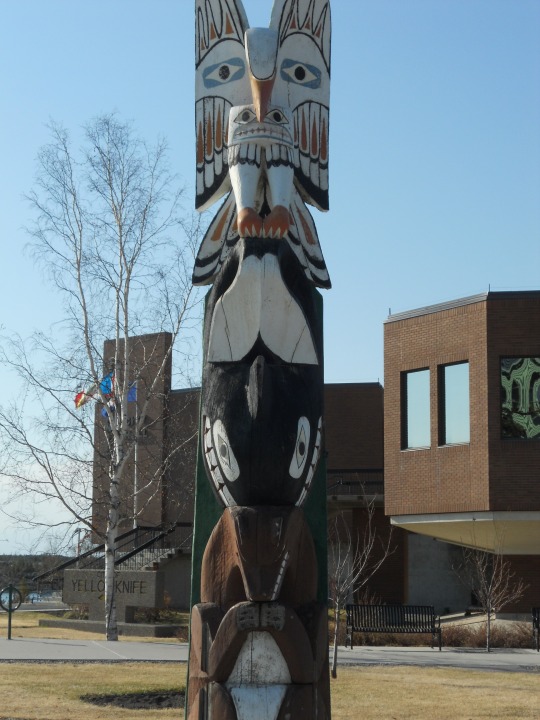 A few metres from that totem pole is another heritage building, the Fireweed Studio. It’s a 1930s log cabin that used to be on the site of Giant Mine, which is an old gold mine located just outside of town. This cabin has been renovated and put to various uses over the years, including as a studio for sales of artwork. Another very similar heritage cabin is around the corner, Yellowknife’s first public school. This school was opened in 1939 in Old Town, with 32 students. It was opened by Mildred Hall and after the building was restored, it was moved to its current uptown location, on the grounds of the much larger school that is named after that first teacher. 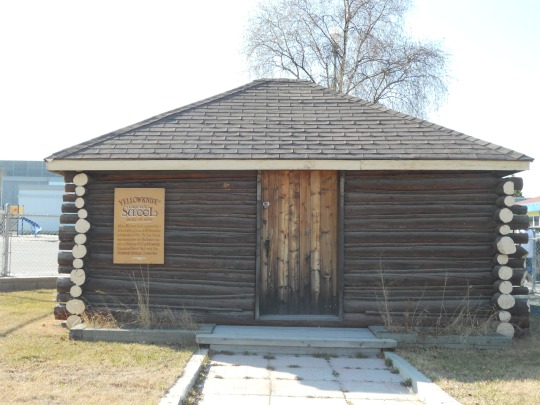 A simple stroll around Yellowknife yields glimpses of its character and history, as this small gold-mining outpost in the Wild West has turned into a capital city and a diamond capital. Just as people change but maintain the essence of who they are, in many ways this town still holds onto its Wild West character. I think that’s a huge part of its appeal, and the people who live here, including newcomers like me, wouldn’t want it any other way.