Cameron Falls, and falling into Fall

As the sun sets on yet another fabulous Yellowknife summer, we take advantage of every last chance to be outdoors, some still in shorts and short sleeves. We’ve already had a fleeting dose of wet snow this month, so some might think that we’re living in denial. I prefer to think of it as simply living it up whenever we can and staying active.

During the summer, the city installed exercise stations in Olexin Park. It was essentially a free outdoor gym. Everything was spanking new, from the equipment standing on the freshly-poured concrete, to the neatly-spread chips of padding material. At first, small children – who can always find a way to play with anything – just jumped and ran on whichever stations they could reach. One day, I saw 2 little boys playing with the large hose nearby, and they managed to scatter the padding material and soak the ground enough to leave a giant puddle. But eventually word got around, and people who met the height requirements started coming to use the equipment.

A gym in a park

For those who prefer less repetitive activity, there are still weekend runs in September, such as the Terry Fox run. A rather amusing event this month, a fundraiser in aid of Special Olympics NWT,  was the Hercules Pull Challenge. It was held at the airport and teams of 15 people competed to pull a Hercules aircraft a distance of 15 feet. This was no mean feat, as it took a lot of effort to get such a giant plane to start moving, and sometimes even the heftiest team member in the anchor position ended up on the ground. Once the plane was in motion, teams had to keep up the effort, because they were competing for the fastest time. It was a load of fun to watch the various teams leaning into it. While it was a windy day for spectators, I’m sure that the teams got quite hot from the exertion. There were some intervals of waiting, as after a few teams had pulled it, the aircraft had to be backed up to allow for another few pulls in available paved area. The winners in various categories were awarded prizes, including trophies and a trip for 2 to Edmonton, courtesy of First Air, the airline that provided the plane. There was also a barbecue at the end, to add to the atmosphere of fun and camaraderie.

To get out into the great outdoors, this month I decided to venture up to Cameron Falls, for the first time. It’s a waterfall not too far off the Ingraham Trail, also called Highway 4, which runs east of Yellowknife. Early on a Saturday morning, when the sun was still deciding whether to stay out or to hide behind the clouds, my neighbour and I took a leisurely drive up. It took us about 45 minutes, with a couple of stops to look at things that caught our eye along the way.  I’ve never been one to go for a drive to “see the Fall colours”, because it has always struck me as odd to go out expressly to look at things that are essentially in the throes of death. But if I happen to see something colourful when I’m on a mission, I’m okay with that. When we arrived at the car park for Cameron Falls, mine was the only car there.  Of course: everybody else was either doing Saturday morning chores, or still sleeping off Friday night. By then the sun had made the decision to stay out.

There was a marked trail into the bush, and as we approached the more rocky parts, there were guide posts with blue tiles at intervals, to keep us on track. We passed a collection of inukshuks at the top of a rocky spot. It looked as if somebody had put one up, then other people who had come by had added their 2 cents. Some of them had been partially knocked over. I have heard so many stories of bear encounters in the bush that I couldn’t help but wonder whether it had been people or animals that had done it.

Experienced hikers have told me that when you meet a bear, neither running nor climbing a tree will save you. Just as well, because the trunks of the trees up here are all so skinny that even if I were to climb one while fleeing a bear, it would probably break and deliver me right into the paws of said bear. I noticed a scratch mark on one tree that could have been claw marks, but I honestly didn’t know if there was a high risk of encountering bears (or wolves, coyotes, or any other creatures) on the Cameron Falls trail. At this time of year bears are eating a lot, preparing to hibernate, so who knows where they might find their food? As far as I was concerned, when in the bush one should expect bush creatures. Since all of them can outrun me and some of them can climb trees, it was best to be cautious, even overly so. So despite joking with my neighbour that my strategy was simply to outrun her, I had brought along bear spray and bear bangers. But I had neither the desire nor the stomach to be in a situation where I needed to use either, so I had also attached a bear bell to my backpack. I figured that between the ringing and the sound of us chatting, all creatures would just stay far away…or perhaps the ravenous ones might consider it their dinner bell.

Some of the inukshuks along Cameron Falls trail

We got to the top of a hill, and on the descent, someone had scrawled “Almost there” in blue chalk.  We hadn’t been walking for very long, so I was a bit sceptical, which later turned out to be justified. 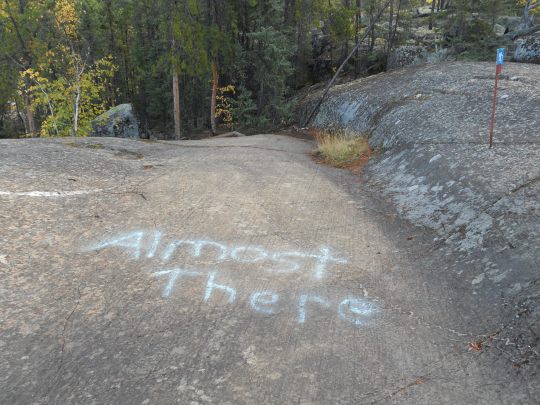 Next we descended a long flight of stairs. I noticed a lot of what looked like some kind of lichen. Most of it was white, and there were some green and red ones either growing out of it, or growing over it. They looked like a Christmas decoration.

Despite the ups and downs, it was actually a very relaxing walk and it felt as if the trail was all ours, since there was nobody else around, as far as we could tell. Most sections of it were rocky, some sections earth, and there were other man-made sections, of a constructed wooden platform.

No bears in sight

After about 20 minutes, we could hear the sound of water falling, but couldn’t see anything. We went down into a ravine, then up again, and eventually we emerged from the bush onto a rocky plateau overlooking the falls. The drop was very steep, and it was a spectacular view. There were a couple of benches provided, to allow visitors to sit and take everything in.

The trail continued around to the other side, so we decided to take in the view over there. Down into the ravine again, it was amazing that we could no longer hear the waterfall. Through the bush and back up again, we emerged upstream, where the water was incredibly calm. Crossing a bridge that spanned high above the river, we were on the other side. Walking downstream, at one point we picked up the smell of a wild animal. Perhaps we were not as alone as we might have thought. We also saw the remnants of a campfire, which was cold. It was a nice spot for a picnic, but I don’t think I’d have liked to camp there for the night. Eventually, we arrived at a lookout point very close to the water. We could see the spot where we had stood on the other side, and the sound of the water was even louder. 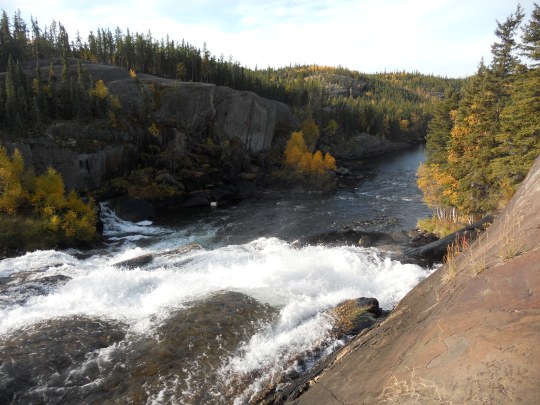 Cameron Falls – from the other side

It was so peaceful that we just stayed there, doing nothing but staring at the rushing water, and being lulled by it.  The water was so loud that we could barely hear each other speak anyway; it was a place meant for silence. After some time, we reluctantly began making our way back to the other side, and traced our steps back to the car. Along the way we met 2 couples, at 2 different points in the trail, and we emerged to discover that 3 more cars had joined mine in the car park. By then, the early Saturday morning chores had been completed, and the Friday night hangovers had been slept off. It was nice to have had the wilderness to ourselves.  When faced with such an opportunity, my Saturday morning chores will always take a back seat.

Copyright © Kathryn Birchwood and FrozenTrini 2013. The use and/or duplication of this material without the express and written permission of this blog’s author and/or owner are unauthorised and strictly prohibited. Excerpts and links may be used, provided that full and clear credit is given to Kathryn Birchwood and FrozenTrini, with appropriate and specific direction to the original content.

Doing it the old-fashioned way

Comments on: "Cameron Falls, and falling into Fall" (6)