Archive for the ‘Northern art’ Category

I have long admired the stone carvings that I’ve seen on display at various galleries and shops in Yellowknife. They are exquisitely beautiful in their depiction of things northern, in their simplicity and their complexity, and in their perfect, polished smoothness. This month I paid a visit to Frozen Rock Studio, where Derrald Taylor – one of 3 artists who share the studio – was gracious enough to show me how they’re made.

Given that there is so much rock in the Northwest Territories, I had assumed that the various types and colours of stone were sourced from different parts of the north. At one time there was a soapstone quarry in operation in the eastern Arctic, but it is now closed. These days the stone comes from southern locales, e.g. the green from northern BC, black from Kenora, ON and also from BC, white alabaster and marble from Italy. So it can’t be said that the carvings are completely from the north because the raw material comes from elsewhere. However, both the images that inspire them and the artistic talent that goes into them are definitely 100 % northern.

I asked Derrald if he ordered the stone in specific dimensions, and he said that wasn’t the case. The suppliers send what they have on hand, and he has no idea what he’s going to make until it arrives and he can see the size and shape. Sometimes pieces have to be discarded because he can’t work with them. The first thing that has to be done with a block of raw stone is to chisel it into a shape that can be worked with, which is still far from recognizable as the final object. This is done by hand. Other artists may collect the pieces that are chipped off, to make small items, or jewellery.

Manual labour then gives way to the Foredom machine, to carve the stone into something recognizable.  There are different carving burrs, which allow for varying degrees of definition.  This process generates a fine dust that floats everwhere, so everything in the studio (including Derrald)  is covered in it. When I arrived he was at the machine, a cloud of dust hanging in the air.

I’m willing to bet that the most universally recognizable icon of the North is the polar bear, and Derrald just happened to be working on a carving of one when I walked in. In the studio, its image could be seen in natural, semi-finished white alabaster and finished black stone forms.

Once the carving by machine is completed, the shape still contains a lot of little rough edges, so it must be filed to make it smoother. This is also done manually, with simple metal files of various grains.

Dry-sanding and water-sanding, using different grits, further refine the shape into a smooth, clearly recognizable figure. The last step is to polish it with oil, which soaks into the stone and gives it a protective finish and a nice sheen. I was pleasantly surprised to discover that the oil used is regular Tung Oil, which I know as a furniture oil.

Tung Oil for the final finish

Derrald joked that the oil was only the second-to-last finish, because the final finish was the fine coating of white dust that lay on everything. There were several finished carvings on display at the studio, fashioned by him and by other artists, some of whom were unknown. None of the carvings was rendered any less beautiful by the icing-sugar-like covering of dust. Stone carving is a transferable skill: Derrald and other stone carvers also create intricate ice carvings at various winter carnivals, like the ones that I captured in my Frozen fun in the sun account of Yellowknife’s Long John Jamboree.

A very popular northern image is that of the dancing bear. This one’s drum and drum-stick were fashioned from moose antler.

Derrald hails from the community of Tuktoyaktuk (Inuvialuktun for “looks like a caribou) which is nestled on the Arctic coast and is fondly referred to as simply “Tuk”. Carvings of sea creatures are also popular, especially of the narwhal. This one shows an adult male – with a tusk made from moose antler – and a calf.  I learned that the calves are born grey and they darken as they age. 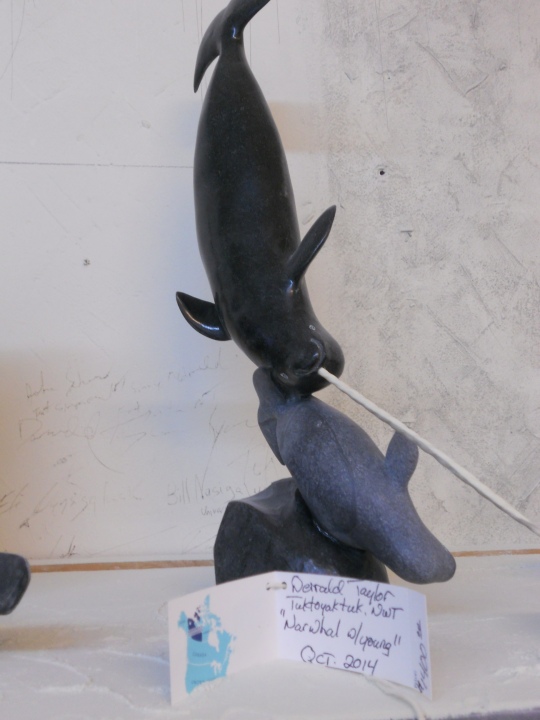 For coastal carvers, whalebone is yet another raw material. The figure on the left is called “Inuk Woman Travelling” and is made from whalebone, by an unknown artist. The hunter beside her is made of stone.

This owl is made from whalebone and it sits on moose antler. 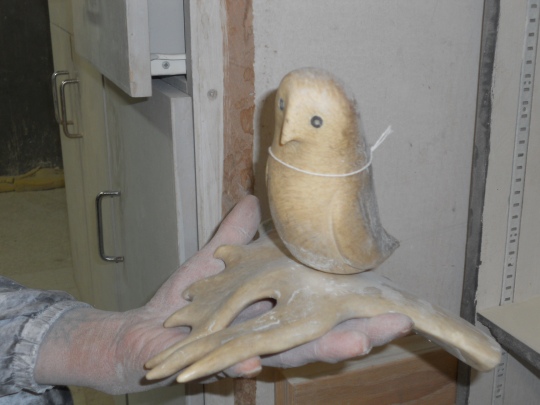 Piece made of whalebone and moose antler

This carving was my favourite, one with multiple facets, made of Italian marble. It was the work in progress of Eli Nasogaluak, one of his studio colleagues. It was unfortunate that the other carvers were away while I was there. On the other hand, it was probably fortunate that Derrald was the only one at work during my visit, so I didn’t disturb anyone with my picture taking and incessant questions.

Stone wasn’t the only raw material present. When dealing with hand-crafted northern art, I now expect to come across something from an animal. There was some moose and caribou antler lying around, waiting to be turned into something artistic.

On the wall, what looked to me like a piece of rubber with string-like threads hanging from it, turned out to be a piece of baleen plate. Yes, from a whale.

These whales have no teeth, so they scoop up huge amounts of water and filter their food out through the fine hair-like structures. I was trying hard to picture exactly how it fit into the whale’s mouth, and Derrald was probably as amused at my ignorance as he was patient and helpful with my questions. There is an innate wisdom in the north: a knowledge of and a connection with nature that is taken for granted, because people live close to the land. We all bring the knowledge of our different experiences to the table, and I learn something every day.

If you ever have the chance to visit the studio, I highly recommend it. You can have a piece made to order. Check it out on Facebook: https://www.facebook.com/FrozenRockStudio